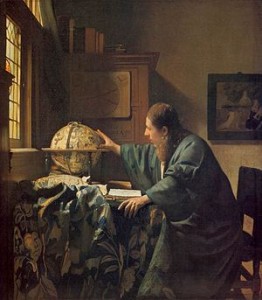 This fairy tale takes place in Delft, a long time ago. It is about a canevas of a famous dutch painter,Vermeer. A character, The astronomer, becomes alive and comes out of his frame, to accompagny a teenager in his quest of the absolute. This intiatory adventure will carry  you along the canals  and into the cozy taverns of Netherlands.
So, enjoy your trip.

It was in the morning, in January that Luth came back.
On the threshold, I saw my mother collapse on her stool where, a lacemaker, she is wont to embroider Flanders lace.
My brother’s head is now buried in her apron. It is 8 a.m.
The barge he just left, fades under the bridge’s arch.
In front, caught against the light, the boatman gives a faint farewell sign.

We live in one of those gothic houses which skirt the Delft canals.
The river’s course, like a moving frieze, offers the incessant spectacle of trawlers and barges.
In the front box of this theatre, I contemplate its actors from my window.
I admire the mariners’ heavy arms with their bulging muscles. Their eyes do not linger on the dwellings which are spread along their path.
I believe nothing will ever anchor the detached gaze of these solitary drifters whose existence flows between the canal’s banks.
But what a surprise!

A familiar character just arose from this animate bas relief.
He is the one I now watch from my gallery, whilst my mother touches lightly the tousled nape of his neck.
I wonder once again about the reasons for his long absence.
And when the face swings around to brush off the caress, I can predict in his smile a sparkling story I would like him to narrate for me.
So, listen to what he told me…
To read more, pay 0,99 euros: